Last Chance To See: Call Me Madam @ The Gatehouse 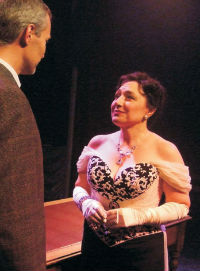 Gido Schimanski as Cosmo Constantine, Beverley Klein as Mrs Sally Adams
There's a rash of American musical revivals in London at the moment, many of the best helmed by director Thom Southerland. This one's sandwiched between a punchy Mack and Mabel in Catford and a promising State Fair at the Finborough.

Madam was Ethel Merman's biggest career triumph after Annie Get Your Gun and casting any part she ever played is a minefield. Here, the role of brassy, crassy party-giving US Ambassador to ‘Lichtenburg’ Mrs. Sally Adams is in the sure hands of Beverley Klein, recently successful as Golde in Fiddler on the Roof, and particularly excellent as the Witch in the Linbury Studio ‘Into the Woods’. In ‘Madam’ her vocal range is tested slightly as some of the songs fall uncomfortably between her chest and head voice, but she delivers power and pathos in equal measure eventually showing the vulnerable romantic beneath the steel magnolia.

The script has been butchered to fit the scale of the venue and production budget, and the political plot of whether or not the US should give a loan to the tiny Grand Duchy is mown down by the theatrical effect of so many excellent Irving Berlin melodies. Sit back and enjoy the ride.

Chris Love is winning as romantic lead Kenneth Gibson, as is Gido Schimanski - a dark horse of the musical theatre circuit and although in his late thirties still ‘discoverable’ - playing Sally's own love interest. The rest of the supporting cast look slightly as though Klein has invited her grandchildren round to tea, but they work darned hard and some of the choreography is brilliant in such a small space. The whole show's miked by the way, heaven knows why because the theatre's the size of a living room and Klein could, in most circumstances, fill a large hall without any assistance.

The Gatehouse is a friendly venue - actually a Wetherspoons pub with good value food and drink - with the invitation to ‘drink as much as you like’ firmly nailed to the doors of the auditorium.