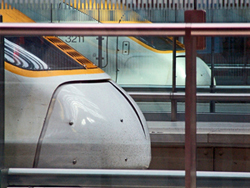 Network Rail has announced its preferred route for the UK's next High Speed rail link. The lines would run along the west coast and take passengers from London to Manchester in just one hour, and to Glasgow in two and a half hours.

The full route would run from central London, via Birmingham, Manchester, Warrington, Liverpool and Preston to Glasgow and Edinburgh.

When the UK constructed its first fast rail route - from the Channel Tunnel to St Pancras - it was officially named High Speed 1. The numbering was seen as optimistic in some quarters, suggesting that further rapid rails might be in the pipeline. Well, now they might well be. Today's announcement takes the prospect of further lines one step closer. However, the final decision must still be made by the Government, after consulting with company High Speed Two, who are drawing up detailed plans for the line. It is estimated that the new infrastructure will cost £34 billion.

Speaking on Radio 4's Today programme this morning, transport specialist Prof Stephen Glaister opined that the earliest date for HS2 would be 2025. Image by Tezzer57 in the Londonist Flickr pool.