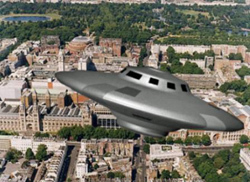 Unidentified 'silver shapes' were seen floating over Streatham yesterday. Hundreds of people supposedly reported the spectacle, with LBC's James Whale receiving a deluge of calls and emails, backed up by a chorus of Tweets.

Did anyone really see lights in the sky, or is it all a pathetic media hoax? The latter, most likely. Evidence. (1) Only LBC and TheLondonPaper gave this any mainstream coverage. (2) The police say nobody reported it to them. (3) By curious coincidence, the sightings occurred on the same evening as a Radio 2 broadcast of War of the Worlds. We smell a little green Martian rat. Especially as LBC are peddling complete and utter space-bollocks on their site today.

Of course, we'd have been much quicker to report all this, but seem to have mysteriously lost several hours while walking through south London yesterday.