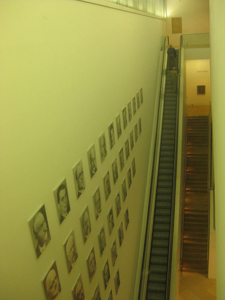 Ha, 40 portraits in one photograph. So sue me. Image not copyrighted by M@.

A US citizen who uploaded thousands of images of National Portrait Gallery paintings to Wikipedia has been threatened with legal action, if a letter from Lincoln's Inn lawyers Farrer & Co., reproduced on the Wikimedia Commons website, is genuine.

All of the paintings are thought to be from the Victorian era or earlier, and are therefore in the public domain. The rather gristly bone of contention, however, is whether the high resolution images of those paintings are protected by their own copyright.

The user, 'DCoetzee', is said to have circumvented technical barriers put in place by NPG and downloaded 3,300 high resolution images, which he or she then uploaded to Wikipedia. Here's one, for example.

Assuming the letter is genuine, this raises all kinds of questions, both about the specific case and its implications to web publishing. Can a flat photograph of an image constitute a creative work in its own right? The US courts seem to think not, as decided in the case of Bridgeman v. Corel. But this case would be brought under UK jurisprudence, where the matter has not been tested. According to the letter from Farrer & Co, 'practicing lawyers and legal academics alike generally agree that under a UK law analysis the judgment in Bridgeman v. Corel is wrong and that copyright can subsist in a photograph of a painting'. The waters are further muddied because both the threatened user and the Wikipedia servers are based in the USA. Some think this matters, some think it does not. It's a tangled web, as the comments on Slashdot testify.

Finally, there's a question mark over the NPG's behaviour in threatening such an action. These paintings belong to the nation and some were acquired with public money. As we are prohibited from taking our own photographs of the collection, shouldn't we be allowed free and unfettered use of the official imagery? Or does the gallery have a responsibility to protect the definitive digital versions of its holdings? We'll watch this one with interest.