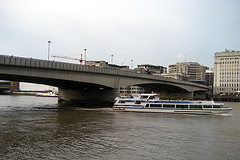 London Bridge, the birthday bridge by wallyg via the Londonist Flickrpool
Mere months after the kibosh was put on more bridges, a Transport for London study has highlighted the need for more river crossings in the east. Two, to be precise.

You can read the study for yourself but the projects under consideration include a pedestrian/cycle bridge between Rotherhithe and Canary Wharf, a bridge or tunnel between Silvertown and Greenwich and a bridge at Gallions Reach. Eh? The latter option appears to be a re-imagining of the Thames Gateway Bridge project which was ruled out due to cost and environmental concerns. We're not sure simply renaming it and cutting it from six lanes to four will eliminate those concerns.

Other crossing suggestions include a cable car which TfL suggested last year which looks brilliant but would probably less than practical. Boriswatch.co.uk notes that there are also privacy concerns with a cable car.

The study has also highlighted the under-use of ferry services between Greenwich and Canary Wharf which would surely be improved by better signage, access to the pier and advertising and offer a significant benefit for a relatively small outlay (at least in comparison to building a whole new bridge). The news that pre-pay Oyster cards will be accepted on Thames boats later this year along with increased rush-hour services is a sensible step towards making the river more commuter-friendly.

Lastly, there's good news for anyone stymied by Jubilee Line closures affecting travel to events at the O2 this month - the long-defunct Reuters pier is being reopened to ferry passengers from East India to Greenwich.