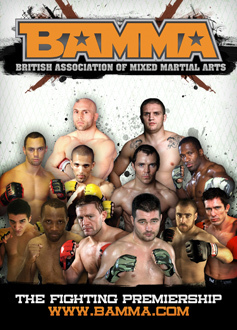 Although The Fighting Premiership may sound like an in-ring rematch between Lee Bowyer and Kieron Dyer, it is in fact the inaugural event from newly-formed MMA promotion BAMMA, the British Association of Mixed Martial Arts. On June 27th, they'll bring the first of three MMA shows to the Room by the River on the South Bank.

For those not yet into the ground 'n pound, MMA, or mixed martial arts, is one of the world's fastest-growing combat sports. Filling the void left by boxing's retreat into pantomimic irrelevance, MMA combines the unpredictable freestyle elements of martial arts, the slobber-knocking hard strikes of boxing, and a flavour of the carnival, larger-than-life caricatures of professional wrestling. The world's biggest promotion, UFC, has risen in the past few years from near-obscurity to a hugely popular, multi-million dollar business, one that has pay-per-view buyrates in the hundreds of thousands, and stars such as Frank Mir and Brock Lesnar who are rapidly becoming household names.

MMA has its fans in Britain, but has thus far lacked a promotion with the power to really break it into the mainstream. BAMMA hope they'll be that promotion. The Fighting Premiership takes place over three dates: a semi-final each in June and August, and a final in September, when champions will be crowned for each of the six weight classes. For the June card, we're promised two fights each from the middle weight, welterweight, and lightweight classes, plus a mixed undercard, which is a a lot of punch for your pounds.

BAMMA will have their work cut out if they're to match the success of their American competitors, but they're going about it the right way, and if The Fighting Premiership is a hit it could lead on to big things. The event is being filmed for Bravo TV, and will feature prominently on the channel's lineup, so the as-yet unknown British fighters have the perfect showcase to show just what they can do.

BAMMA: The Fighting Premiership is on June 27th and August 15th, with the final taking place on September 26th, all at the Room by the River, 99 Upper Ground, SE1 9PU (map). Tickets cost from £25.