Putting The Witch Back Into Greenwich 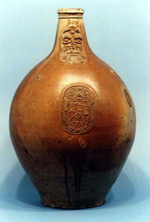 News of a somewhat diabolical nature reaches us from SE10. New Scientist relates the tale of a 'witch bottle', buried for centuries in the soil of Greenwich and uncovered by builders in 2004.

You can use a witch bottle to ward off a curse. It's easy to do, and fun for all the family. Simply fill a bottle with a few magical trinkets, top up with piss, then inter the vessel upside-down in your back garden. Any meddlesome crone will think twice before hexing you again. Common sense, really.

Although the practice was supposedly widespread among the credulous population of the 16th and 17th century, it is very rare to find an intact witch bottle. The salt-glazed jar from Greenwich is the first to undergo detailed scientific scrutiny, only now published in British Archaeology.

Researchers at the University of Loughborough used X-rays, tomography and chemical analysis to piece together the long-lost recipe for 17th Century witch repellent. As well as a generous helping of human urine, the charmed vessel also contains

...bent nails and pins, a nail-pierced leather "heart", fingernail clippings, navel fluff and hair. The presence of iron sulphide in the mixture also suggests that sulphur or brimstone had been added.

Alas, none of the press reports gives an indication of where exactly in the borough the bottle was unearthed. We await with baited breath an account by Greenwich Phantom, who seems both geographically and supernaturally qualified to comment on this matter.