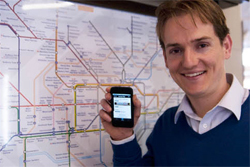 Here's a neat, if geeksome, idea. A phone application that tells you which Tube carriage to use in order to be next to the exit at your destination stop. Tube Exits is causing quite a buzz among a certain demographic. You can download it for iPhone and iPod touch on the iTunes App Store for an introductory price of £1.79 - about the same price as a single zone 1 journey. We talked to Lance Stewart about his creation.

How did you come up with the idea?

I was inspired by my experience on the Tube, often getting stuck behind the crowds of people walking along the platform and through the narrow corridors. In particular, on one occasion when I was running late for an appointment I got off at the wrong end of the platform at Oxford Circus and got stuck behind the crowds. I was very late as a result. The next time I visited Oxford Circus I made sure I arrived on exactly the right carriage to arrive directly opposite the 'Way Out' platform exit and to beat the crowds. I thought this doesn’t need to be put down to chance any longer so set about creating Tube Exits to help solve this problem for London's tube commuters.

So does this work down on the Tube, where there's no reception?

It was naturally very important to create the app so that it could be accessed anywhere in the London Underground (including waiting on the Tube platform) and I am very pleased that it does this.

Tell us a bit more about how you collected the data. Hit any problems?

After coming up with the idea for Tube Exits I realised that sourcing this information would require visiting every platform on the London Underground. Not surprisingly I didn't get any volunteers from my friends. I realised that to be confident in the app's accuracy I would have to swallow my pride and ride the whole Tube network - all 270 or so stations. The biggest problem was finding the time to cover the whole Tube network.

Is this the first app you've created, or are you an old hand at this sort of thing?

Tube Exits is my first app. I am really just a regular Joe who had an idea and took it through to completion. Of course, being someone without IT experise there's no way I could have done this without the tremendous assistance of my developer, Pieter Raubenheimer.

It's a brilliant idea but, you've got to admit, very nerdy. Have you taken any ribbings from friends and family?

Thanks and umm...thanks! I always thought trainspotting was a bit nerdy and I guess I've taken things to a whole new level! When friends and family ask me about how I gathered the data and look a bit stunned when I tell them that I did it. They think I am a little crazy, but seem to understand the need to have confidence in the data accuracy.

What, in your opinion, is the worst interchange on the network?

I always used to dread the long walk between Bank and Monument. These days I find the interchange at Green Park from the Victoria line (northbound) to Piccaddilly line (eastbound) to always be so busy and made worse by the long narrow tunnel walkways. Of course, with Tube Exits I know to get on the front of the Victoria line train (second carriage to be precise) to arrive by this platform interchange exit to minimise the walk and stay ahead of the crowds!

Do you have any additional features planned for future releases?

Yes, there's a list of new features in the pipeline, including telling commuters which side of the carriage to exit (which can actually be very handy during peak hour). Once users download the app new features such as this will be available in future updates (at no extra charge). I also welcome any suggestions.

And could you take the concept to other cities?

I really hope Tube Exits appeals to London's commuters. This will give me confidence to keep on improving it and rolling it out to other cities. I've already had expressions of interest from people who would like to help get the concept to their city and as we speak there are a couple of people riding different metro and subway systems to gather the data. So watch this space...

There's an incredible buzz about Tube Exits on Twitter. How does this make you feel?

It's really pleasing to see such positive talk about it after putting so much time into bringing the idea to reality. Someone came up with the clever take on the Apple commercials: "Want to board the right carriage to arrive right by your platform exit? There's an app for that"

Fortunately not. Over the years though I have seen a lot of worse for wear people on the Tube (and particularly on the night bus!)

More information can be found at the Tube Exits web site, including You Tube videos.