Skylon, Mother Of All Javelins, To Be Rebuilt On Olympic Site?

By M@ Last edited 130 months ago
M@ Skylon, Mother Of All Javelins, To Be Rebuilt On Olympic Site? 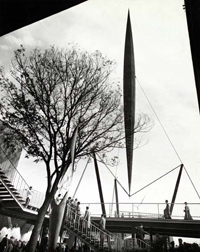 Could the Skylon be rebuilt on the Stratford Olympic site? Campaigners are negotiating with Olympics supremos to resurrect the giant spike in time for its 60th anniversary in 2011. The original structure, built for the 1951 Festival of Britain and erected on the South Bank, was only designed to last a few years but captured the imagination of the nation. The new version would be as faithful as possible to the original, but made from more durable materials. According to the Building Design website (who have an excellent video), Boris is backing a campaign to erect the bacteriophagic tower on the Olympic site rather than putting it back on the South Bank.

Skylon is a totem of those great festivities that bewitch the capital every 50 years or so. It's heirs and antecedents include the Crystal Palace from the 1851 Great Exhibition, the vanished White City pavilions of the 1908 Franco-British exhibition, and the Millennium Dome from our own era. If erected on the Olympic site, the Skylon would bring a much-needed sense of continuation and heritage - like threading the laces of some trusted old brogues into immaculate new trainers. Londonist applauds the initiative.