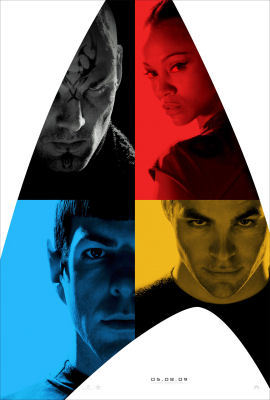 Set phasers to fun. Star Trek's back, and bursting with a freshness not seen in the franchise since Commander T'Pol's Vulcan shower. The new film opens at the BFI IMAX (as well as tribble-sized screens) tomorrow, and we reckon you won't be disappointed.

Lost creator JJ Abrams has rebooted and re-miniskirted a show that's now ploughed through more generations than Wayne Rooney on a weekend bender. We're back in the golden age of Trek, where the captains have hair, the bad guys are bald, and sliding doors make unnecessary noises. So the original Enterprise crew get the X-Men Origins treatment, as we learn how Kirk, Spock, Bones, Scotty and their sketchily defined colleagues first came together.

Or do we? There's a spot of temporal mischief right at the beginning that sparks off one of those alternative timeline scenarios that fans are all too familiar with. Consequently, everything which later unfolds is decoupled from established Trek history. It's Kirk, Jim, but not as we know him. This conceit neatly sidesteps a need to follow established canon, but might leave the hardened Trekker feeling a little cheated. Sucks to that, though, for Star Trek is so well paced and scripted that you'd have to be as grouchy as a Klingon teenager to not be cheered.

The magic of the film lies in its cast, who gel together better than any previous debuting crew. Chris Pine is a feisty and cocksure Kirk, boldly ego-ing from one punch-up to another. Captain Smirk's foil-turned-companion is a touchingly vulnerable Spock played by Zachary Quinto. The pair are supported by a fresh-faced but believable cast of TV actors who fit satisfyingly into both their roles and their jerseys. Bruce Greenwood lends a Picardian gravitas to the chain of command as the Enterprise's Captain Pike (an officer of ill fortune, it seems, in any universe), and a saggy-faced Leonard Nimoy shows up as 'proper Spock' to steal all the best lines. Only Simon Pegg as Scotty seems somewhat awkward and forced, but by no means disappoints.

There is one let-down, and that's the plot. Romulans from the future travel back in time to wipe out the Federation in its young and vulnerable days. Sound familiar? That's because the Borg tried it three films back, as did the Xindi in Star Trek Enterprise. Will these aliens never learn? At the risk of entering pseud's corner, the movie plays like Gregorian chant: superb harmony and rhythm, well-crafted verse, but not much by way of melody. Still, everything else shines so much - including the special effects, the score, and the interior design on that most famous of space ships - that the film received a hearty round of applause at the preview screening. The cast are signed on for two sequels. On this form, we hope they live long and prosper, before passing the baton on to The Alternative Reality Next Generation.

Star Trek opens at cinemas in this and other universes from Friday. Book now for IMAX tickets.