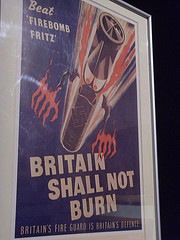 Image by mermaid99
Three men accused of attempting to firebomb a north London publisher's house have been found guilty. Ali Beheshti and Abrar Mirza pleaded guilty to recklessly damaging property and endangering life, after they poured diesel through the letterbox of Gibson Square's residential office in Angel. A third man, Abbas Taj, was found guilty of being their getaway driver.

This wasn't the most expertly planned crime: the trio had been under police surveillance for some time — Beheshti had made himself an obvious target by showing up at protests carrying his daughter, who wore a "youngest member of al-Qaeda" T-shirt — and on the night of the attack last September, were followed all the way by armed officers, who were able to put out the fire quickly and arrest all three men.

However, despite losing the battle, the three may have prevailed in the war. The trio attacked Gibson Square because of the publisher's decision to release The Jewel Of Medina, a novel that covers the life of Aisha, a wife of the Prophet Muhammad. Prior to publication, the novel gained an unfair reputation after an American historian, Denise Spellberg, accused it of "[making] fun of Muslims and their history". Despite critics and author Sherry Jones refuting this claim, original publisher Random House got cold feet and backed out, and it was picked up by smaller, regional firms, which in the UK meant Gibson Square. The attack came just weeks after publisher Martin Rynja announced it on his company's list.

Though Gibson House initially claimed that they would go ahead with the publication, it has yet to appear (it's listed on Amazon, with a release date of October 2009). Twenty years after the publication of the Satanic Verses smudged the line between free expression and causing offence, what Noam Chomsky once called "self-censorship" is the default mode in publishing. In 1989, those involved in the Rushdie novel's publication were indeed damned, with copies burned and translators murdered. In 2009, as Kenan Malik put it in his recent book From Fatwa To Jihad: "the fatwa has effectively become internalised."