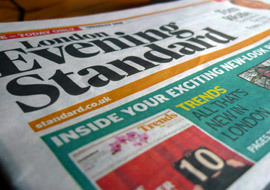 The new-look Evening Standard hit newsstands this afternoon, with 650,000 free editions being pressed into commuters' palms. If the advertising campaign hadn't caught your attention, the front page might, though perhaps not for the right reasons: the weighty masthead, which shoehorns in the word "London" but shuffles the familiar Eros logo onto the inside page, makes it look a little like a forgotten provincial rag rather than the "voice of London" that editor Geordie Grieg promised. Splashes of orange that linger throughout the paper, presumably to fluff up all the happy news they'll be reporting, seem incongruous when set against the dismal story of MPs expense claims.

The front-page prominence of Tom Wolfe, who writes a typically barbed piece on finance's excesses, is encouraging in one sense — boasting a high-quality exclusive is the kind of thing that might just encourage commuters to forsake the freesheets and part with that 50 pence coin — but doesn't seem the most Londony way to re-focus the paper on its subject city. More encouraging is the new "Trends" section — "five pages of the cutting edge" — and is the first of a middle features section that will change daily ("Fashion, Style & Sex" tomorrow) that clearly hopes to mop up magazine readers. Elsewhere, there's an exclusive on a new Gilbert & George exhibition, columns from heavyweights names Sam Leith and Nicholas Hytner, and the promise of further big announcements as the week unfolds.

A dark cloud already looms on the horizon, though. Poisoning the well before the plebs have even slaked their thirst is ex-editor Veronica Wadley, who seems to have taken that "Sorry" campaign rather personally. In a Guardian interview she gave new editor Geordie Grieg a kick in the roubles, deriding the "Pravda-style" promise of good news and claiming that the new regime is "humiliating" staff members while "denigrating the judgement" of the paper's 500,000 readers. Citing the numerous "campaigns" that the Wadley-era Standard was fond of starting (and then ignoring), the former editor argued that under her watch the paper had tapped the city's zeitgeist, and made the salient point that, in this reckles attempt at entrancing new readers, the paper was in danger of jettisoning long-term fans.

The print edition aside, the Standard has also undergone a underwhelming overhaul of its website, and put the second stage of its ad campaign into gear, replacing last week's apologies with an optimistic series of promises. But will it be enough to plant the paper's footprint across the media-clogged London landscape?