Stokefest A Victim Of Its Own Success 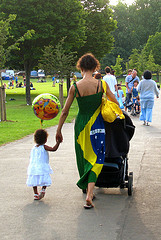 Stokefest 2007 by Mulia
Stokefest, the music festival in Stoke Newington's Clissold Park, is no more. In a short message on their website, organisers announced the bad news that, after six years, they have decided to cancel the annual event due to increasing logistical difficulties.

The festival's growing popularity, which had already caused organisers to shun publicity in hope of keeping within Hackney council's 15,000-person limit for Park events, last year drew the attention of the council's policing department, which invoked plans that state any event hosting 3,000 people or more must be fenced in. Londonist visited last year, and the new metal barriers had created predictable chaos around the entry and exit bottlenecks, replacing the amenable atmosphere that Stokefest was known for with an officious and stressful air.

In recognition of these hurdles, the organisers have made the sad but understandable decision to throw in the towel, stating that under such conditions

the atmosphere will change, the essence of what we all collectively had would be diluted, and our memories of the fun we had would be tainted by the security systems, ridiculous entry conditions and a general lack of freedom.

Following the demise of Rise, this is the second free summer festival that London's lost in 2009. Perhaps last year's debacle proved that Stokefest had indeed jumped the shark, but it's a shame when grassroots-born, locally-supported free festivals disappear. There's also a wiff of conspiracy around Hackney council's sabotage: one of the alternative events that Stokefest's organisers recommend, tongue perhaps in cheek, is the new Free Range festival, which takes place in, would you believe it, Clissold Park, this September. The catch? A £25 ticket.

For those with cherished memories of London's free festivals, the Thin White Duke offers the perfect coda:

It was God's land, it was ragged and naive... it was Heaven"