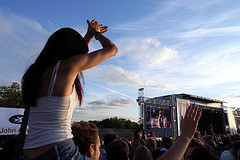 2008 Rise festival by Orhan*
The Rise Festival, a semi-regular midsummer fixture on London's music scene since 1996, has been axed after losing its sponsors. Trade unions Unison and Unite the Union were set to pony up the cash but they pulled out, leaving City Hall a £551,000 bill, which Boris Johnson was ill inclined to sign off. He has declared, however, that it will be replaced by an event called Rhythm of London in July, a "multitude of events and grassroots activities" focusing on music education and aimed principally at young people.

Known until 2005 as the Respect festival, and usually hosted in Finsbury Park, with the occasional visit to Burgess Park or Victoria Park, Rise became an enjoyable highlight of the summer under Ken Livingstone, who resurrected it in 2001 after a three-year hiatus. Inviting musicians of international renown, activists, ravers, earth mothers, dodgy left-wing student politickers and young street thugs into a free festival sounded like a queasy mix on paper, but somehow it worked.

After seven successful years, things turned awry last year when Johnson stripped the festival of its overt anti-racism message and replaced it with the foggy-headed slogan, "celebrating diversity". The union supporters threatened to walk out then, and this year have done just that. Ken Livingstone defended their decision, saying that they had signed up for an event with a specific anti-racist message, and called the cancellation a "blow to good community relations in the city"

In its brief life Rise attracted some impressive names — De La Soul, Kelis, CSS, Jimmy Cliff — as well as some less memorable acts (Chumbawumba? Tim Westwood??) and had perhaps outlasted its welcome. But it will be missed this year in a city which, more than ever, needs a chance to unwind and escape the realities of daily life. However, as the festival's 2001 comeback proved, though Rise is sunk for now, the phoenix may not be cooped up in those ashes for long.