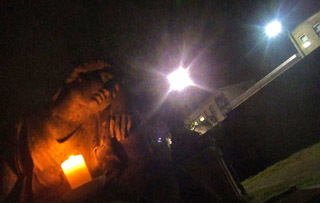 It's the event that Londoners have been dieing for. London Ghost Week begins on 24 April, and celebrates all things spooky in the capital. Highlights include an all-night vigil in a Victorian school, séances at the sites of Ripper victims and an X-factor-style show to find London's Best Medium.

The Ghost Week is organised by spook-hunting company Fright Nights and follows similar events in Edinburgh, Oxford and Canterbury. Our city out-trumps anywhere else in the UK for its supposed supernatural population, so it's about time someone got round to planning something like this. We're complete and utter skeptics in such matters, but find the prospect of a night in a creepy building irresistible. Proof.

Head honcho of Fright Nights, Marting Jeffrey, thinks we might be in for an eye-opening experience. "Skeptics often warm to the investigations," he says. "We've had some fairly inexplicable things happen over the years. For example, back in 2003, we witnessed the full manifestation of a little girl in front of 23 people in Dudley Castle."

Ghost hunts will take place at some of the capital's lesser-known haunted sites. "We really like exploring these hidden nooks and crannies," says Jeffrey, who nominates the Admiral's House in Greenwich as his pick of the venues. "It's an extremely haunted property, with all the activity focusing on the stairs. There are many reports of strange noises, and sightings of a white lady. But there's never been a public ghost hunt there before." Other paranormal stake-outs will take place in the morgue at the Old Naval College, Greenwich, the Ragged School Museum in Mile End, houses in Ilford and Finchley, and the Canal Museum in Kings Cross. Each event will be overseen by a medium who will attempt to contact the dead and give advice on sensing paranormal activity.

All bunkum, if you ask us. But bally good fun all the same. And we haven't even mentioned the magician versus the medium face-off, at Magic Circle headquarters. Londonist will be along to the ghost hunts at the Greenwich morgue and the Ragged School, and hope to (discretely) Twitter the events live. So if you can't make it along, you'll be able to watch our descent into madness unfold before your very eyes.

London Ghost Week runs from 24 April till 2 May. A complete list of events can be found here.