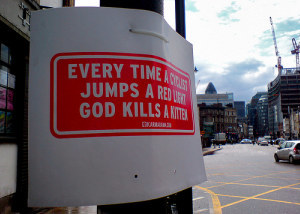 Save the kittens! Image courtesy of mappamundi from the Londonist Flickr pool
We all either do it, know someone how does it or have watched someone do it. We're talking about cyclists running red lights, of course. It's a controversial subject, and The Times claims a TfL study showed women cyclists would be safer if they didn't obey traffic signals. Coming in the wake of a woman crushed to death by an HGV lorry at Elephant and Castle last week, it's no wonder the thoughts of Boris turned to the issue.

The Mayor has written to the Department for Transport to suggest a pilot scheme allowing cyclists to ignore traffic lights when turning left. It's a system that works for vehicles in other countries, where they're allowed to turn into side streets so long as there aren't any pedestrians in the way. The idea is to allow those on bikes to get out of the way of anything bigger at junctions.

But City Cyclists are not happy. They say the majority of road accidents happen when cyclists are going straight ahead and data from a City of London study on their website shows that just 10% of collisions happen when turning left - almost as many as drivers opening their car doors. (Doesn't anybody look any more?) National cycling organisation CTC doesn't think there's a way to do it without affecting pedestrians (but surely, if other countries have figured out a way?). The DfT also says any change to traffic legislation would need to be approved by Parliament, which makes it all sound rather a faff.

HGVs are undoubtedly a danger to cyclists, but with funding for cycle lanes cut by £10m and work on the dangerous Elephant and Castle roundabout stalled because Boris doesn't want to affect motorists, we wonder if there might not be something bigger that can be done to make cyclists safer?