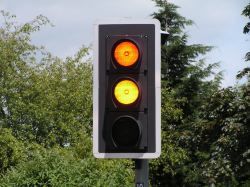 At the end of last month we posted about a parent's groups who were protesting over cyclists' behaviour at red lights in Stockwell.

It's always a controversial topic this one, and the comments we received on the post confirmed that. Andrea from the fantastic Velorution (our favourite cycling blog) said:

Rather than complaining about cyclists running red lights, why doesn't Londonist promote a campaign to change the law so that red lights become equivalent to yield signs for cyclists? You will certainly see more respectful cycling.

Now she's expanded on that view on the Veloriution site with this post, which itself is a reaction to an article by Matt Seaton in the Guardian recently calling for cyclists to stop at red lights.

We cyclists need to put our own house in order: if we want to be treated with respect by other road users, we should start earning it.

Seaton's article and the Lambeth protests have led to the establishment of the Stop At Red campaign where cyclists are asked to electronically sign a pledge to put the brakes on when they see a red light.

Andrea's reaction to this?

It is dispiriting seeing intelligent people waste their time on a non-issue. It is disappointing to see people in the trade with such an inferiority complex that they feel the need to pander to the whims of the motor lobby. It reminds me of Blair brown-nosing Bush before the Iraq invasion...

... rephrase the discourse in terms of peace and safety. No more red/green but the white of peaceful co-existence and that requires acceptance that

- the most vulnerable need most consideration, and

- if one chooses to use a vehicle that is a threat to others, his/her rights of movement should be curtailed, according to the threat the vehicle poses.

Some cyclists do not show consideration towards pedestrians; many others do not always stop at red lights. The first group is asocial and needs to be dealt with. Irked about the latter? Just change the law to say that cyclists have to stop and yield at red lights, like in Utah.

Personally we always stop at red lights becasue we cycle through areas like Vauxhall Cross and Trafalgar Square and we don't want to die yet. But what do you think, is this argument ever going to get a happy ending?