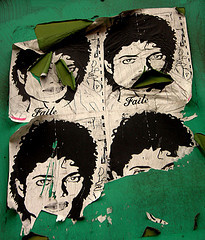 Image by Herschell Hershey
In a long-expected move, Michael Jackson finally confirmed that he will perform a series of 10 shows at the O2 this summer. The first show is booked for July 8th, and tickets will go on sale March 13thm starting at £50.

Posters advertising the show went up overnight, so the announcement was something of a formality. Still, the sight of the performer appearing in Greenwich, dapper in black-n-silver and looking a little waxy 'round the face but otherwise in good nick, was a fascinating one. Jacko attracts rabid, frothing fans like nobody else in showbusiness, and hundreds of them showed up to watch their idol arrive late, mumble his usual inanities, and slip away again. Promising that these will be his final ever shows, Jackson vowed that he will "be performing the songs my fans want to hear." With just one poorly-received album of new material in the past decade, those who fork out for the tickets are guaranteed to hear the classic and be spared the oft-awkward moments when aged musicians try and spin new, instantly forgettable material.

Speaking of the classics: can Jacko still deliver on stage? His live shows were legendary for their dance routines, often so intricate that it's taken years for the likes of Britney or Madonna to catch up. But the man turned 50 last year, his health problems are the subject of salacious rumours, and to put it mildly, he doesn't always cut a public figure as a level-headed, responsible member of the human race. Still, with a £50m fee from sponsors AEG to honour, and sell-out crowds, the pressure is huge.

The shows will be big, relying heavily on backup dancers and dramatic effects, with Jackson's input probably curtailed when compared to his Eighties and Nineties arena tours. They'll almost certainly be memorable, although possibly for the wrong reasons, and at least a small number of people will go simply for the chance of seeing a multi-million pound catastrophe. But when the lights fall dark that July evening, the entire world will be wondering what will happen next, and Londoners should feel privileged that one of the grandest stories in 20th century popular culture will have an improbable epilogue written in our very own city.