Michael Jackson And The Haunted Caves 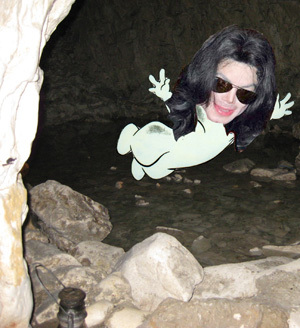 No one's gonna save you from the beast with forty eyes.

Jacko rumours continue to circulate like Marmite in milk. But how about this one, from the Telegraph of all places?

"Michael Jackson will live near haunted caves during London concerts".

It's clearly some kind of Mephistophelian pact. "Yes, Michael, you CAN have your career back. You CAN have 50 sell-out concerts. They'll forget that child molestation nonsense and the baby dangling incident. You can even ride an elephant on stage. BUT. You have to spend the night in this old, abandoned mine...mwah-ha-ha-ha!".

During his extended London stay, Jackson will abide in a £1 million country retreat above Chislehurst Caves. The Bromley tourist attraction claims one of the most horrific revenants in the south-east; a phantom so frightful it has left grown men gibbering and, according to tour guides, those most objective of sources, yanked arms out of sockets. The man-made caves reportedly date back to Druidic times and became a popular shelter during the air raids of WWII.

Jackson should feel a strong affinity to the caves. His troglodyte pallor and brittle countenance, itself hewn from living rock, may have drawn him to the area. We do hope he resurrects the Chislehurst Challenge, whereby one must spend the night alone in the caves braving the ghoulish apparition. But would the ghost be up to such a challenge?