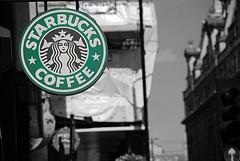 Bunch of suckers, us Brits. Show us a dream and we’ll buy into it. Especially if it hails from Stateside. We watched Friends, and suddenly we all wanted to be 30 something, carefree and urbane. Which was clearly best epitomized by our schlepping (whatever that means) on a couch and schlurping coffee all day.

Starbucks was always going to work in London. It offers coffee with knobs on, somewhere to chow stuff over, and lots of naughty stuff disguised as trendy/aka healthy stuff (just thinking about the calories in a panini or a frappuccino makes our belts feel tighter). A mugful of marketing. Out of London it has become a Mecca for the nation’s aspirational female teens: nothing says ‘I’m hip’ to a fifteen year old quite as strongly as the act of hanging out at Starbucks with mates. The firm’s combination of foam, cream and sugar and the occasional whiff of a coffee bean is bound to appeal to trainee grown-ups.

Well now it seems we can buy into the image for less. Instant Starbucks. Yup, we had to roll it around our heads for a few minutes to grasp the concept. But it’s not an early April Fools - the stuff was launched at Heathrow yesterday (sorry we weren’t there - we’d have put it straight on a plane home). Someone needs to tell the coffee mammoth the truth: their coffee really isn’t anything special. In fact, we find it leaves a real nasty after taste and makes our stomach gurgle. Their paninis are greasy, their cakes over-priced, their staff often miserable and stressed, and their loos invariably dirty. There: we said it. For proper caffeine, happy baristas and edible food give us Pret or Costa any day. And we are prepared to bet that the nation really doesn’t want instant anything from Starbucks: we tolerate them because we want to sit on battered couches and pretend to be clever for a wee while.

The invasion continues as they’re also opening more branches. We were slightly amused by the so-called Starbucks Effect when first the expression was coined, but we reckon the pendulum is swinging the other way now. The trendiest parts of town are the ones that are Buck free.

Image by Space Monkey via the Londonist flickr pool.