G20 In London: Who's Protesting Where? 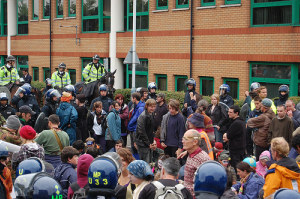 2007 Climate Camp at Heathrow / courtesy of Andrew* under a Creative Commons licence
Right then! We've seen what the G20 is and what people are mad at them about. Or just mad about in general. Now for the fun bit: what's actually happening on these streets of ours?

The Put People First march starts at Victoria Embankment by Temple station, at noon. Anyone wanting to join in should start to gather from 11am (the earlier the better, really). It's going to go past Parliament and Trafalgar Square, down Piccadilly and finish up in Hyde Park, where you'll be able to listen to Susan George, Tony Woodley, Brendan Barber, Tony Robinson, Mark Thomas, Daby Toure and Luke Pritchard of Kooks fame.

It's Financial Fools Day, everyone! The first (scheduled) protest is the G-20 Meltdown march on the Bank of England, kicking off (hopefully not literally) at 11am with a four-pronged procession representing the Horsemen of the Apocalypse:

*The red horse against war starts from Moorgate

*The green horse against climate change starts from Liverpool Street

*The silver horse against financial crimes starts from London Bridge

There's a big party planned when the processions meet at the Bank. This is billed as a very English protest, and they're recommending you bring food and water to share (especially cake: "you can't have a revolution without cake"), flags and musical instruments.

Climate Camp is setting up at exactly 12.30pm outside the European Climate Exchange at 62 Bishopsgate. If you want to go camp, take your own tent and sleeping bags, food and water, and anything to decorate the area.

Campaign Against Climate Change is holding a Fossil Fools Day protest outside the ExCel centre 12.30-7.30pm with a rally at 6.30pm. They'll have a big 'iceberg' and they invite you to bring your own 'ice blocks' and dress in white.

People and Planet are planning action against RBS-NatWest as part of their Ditch Dirty Development campaign, against funding of fossil fuels. There's not much detail about times and places, which is quite possibly deliberate.

Stop the War Coaltition are meeting at 2pm outside the American Embassy in Grosvenor Square to protest against the wars in Iraq and Afghanistan.

Fossil Fools Day will also be outside the British Museum's Great Russell Street entrance from 6pm, where BP are (kind of stupidly) celebrating their centenary. Protesters plan their own party (bring banners, instruments and "a sense of climate justice").

This is the day the serious G20 meetings actually happen, so Stop the War are taking the opportunity to march on the ExCel centre. Be at Canning Town station by 6am.

We can't quite work out who's supposed to be making sandpits in the streets, and there's bound to be smaller actions happening all over the city. We would say this though: although the events detailed above are all fluffy protests, all police leave has been cancelled and there will be a very, very heavy presence. We've already questioned whether the Met have been ramping up the expectation of violence to justify harsh tactics, so don't do anything we wouldn't do.

Did we miss anything? Let us know in the comments, and don't forget to send us your photos.