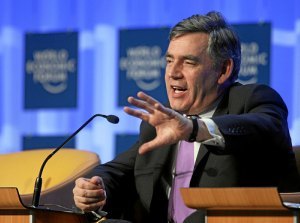 At least Gordon's happy / image by Andy Mettler and World Economic Forum under a Creative Commons Licence
In the first of a wee series on this G20 palaver, we thought we'd start with a short briefing on the G20 itself and why the hell they're descending on us.

The Group of Twenty Finance Ministers and Central Bank Governors (snappy title) came about in 1999 in response to the - now frankly piddling in comparison to our own econalypse - financial crisis of the time. In its own words, it aimed to "promote open and constructive discussion between industrial and emerging-market countries on key issues related to global economic stability". In our words, finance ministers from the world's key economies, plus the occasional EU and Central Bank representative, get together once in a while to chinwag about how the world's economy is holding up. Or not.

When the poop hit the fan last year, leaders of the G-20 countries decided to get together in Washington (the credit crisis being too important to leave to finance ministers). You may recall people talking about it as being a 'second Bretton Woods' and optimistically hoping for new developments in financial system regulation. It wasn't and didn't happen. So now they're all getting round the table again to talk about how best to stabilise and strengthen the global economic system. You know. Little things.

This is why some of the world's most powerful political and financial leaders are gathering in the glamorous environs of the ExCel Centre on 2 April. Let's hope it all goes a bit better than the last time London hosted a world economic summit - back in 1933 during the Great Depression (parallels, parallels) when the newly elected US President Roosevelt torpedoed the whole thing. Though if the politicos can hang on just an extra day they might learn something from the Millionaire Mind Intensive Seminar, for "more wealth and happiness". By this stage, they're probably willing to try anything.

Next up... why are so many people coming out to protest?