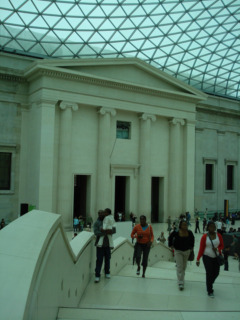 Image author's own
Behold: a ray of good news sunshine amidst the dark and gloomy financial skies! London's tourist attractions packed more people through their doors last year - almost 10% - than in 2007. The Association of Leading Visitor Attractions (who don't cover privately run tourist traps like Madame Tussaud's and the London Eye) says the British Museum is the city's largest draw, pulling in nearly 6 million people last year - no doubt helped by the big Hadrian and Babylon exhibitions.

Tate Modern is next on the list with 4.86 million visitors, followed by the National Gallery (4.38 million) and the Natural History Museum (3.7 million). And what do all these places have in common? That's right - they are, of course, free. The Tower of London is the most visited paid-for ALVA attraction, with 2.16 million people going last year to point at Beefeaters.

We assumed the increase was down to foreign visitors taking advantage of the weak pound, but then we found some Office of National Statistics, um, statistics, showing overseas visitor numbers fell in the three months to last December. During 2008 the UK apparently had 2% fewer foreign visitors than the year before but they spent 3% more. Which was nice of them.

If our totally unscientific survey of people in the Marble Arch Marks & Spencer and number 23 bus this afternoon is anything to go by, London's still a major draw for foreigners (who needs evidence when anecdote will do?). The BBC are being moaning minnies and highlighting the 36% of ALVA members who think their visitor numbers will fall this year, but over 60% of them reckon numbers will either rise or stay the same - probably helped by expectations that more of us will holiday on our own shores in 2009. (By the way, can we please move to ban the word “staycation” right now?)

However, London's tourist gain looks to be Scotland's loss. Visitors to spots north of the border fell around 10% last year. One theory is that people are spending less time in the UK as a whole and many simply aren't making it out of the capital. Should we expect raiding parties?