Has Dionysus Had Its Chips?

By Dave Haste Last edited 149 months ago
Dave Haste Has Dionysus Had Its Chips? 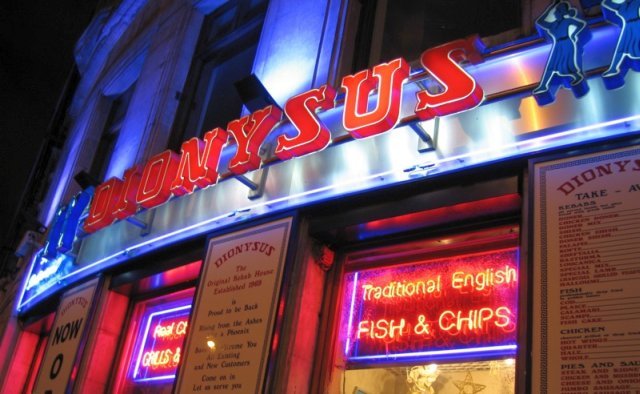 Plenty of publicity has been given to the oft-rescheduled closing of the Astoria to make way for the construction of a new station for the long-procrastinated Crossrail project. But it’s worth remembering that the Astoria is not the only establishment that is being uprooted by this work - we’ve been told that the mighty Dionysus kebab house is also a casualty of progress.

We were tipped off by an email from ‘CJ’, who had this to say:

Today is a sad day for chip-starved clubbers everywhere - Dionysus Fish and Chip Shop on the corner of Oxford Street and Charing Cross Road closes its doors to make way for some train station I will probably never use.
Being a Londoner of a slighter older vintage I can remember when this glorious establishment was situated slightly further up Tottenham Court Road in what we used to call the Greek chip shed.
The best chips and the smelliest pickled onions in the West End.
I've heard they are going to try to find new premises. I hope they do. Even though my clubbing days are over, a girl still needs to know where she can lay her hands on a damn fine bag of chips and under-the-counter onion vinegar.

For the uninitiated, Dionysus is no mere chippy. It is an institution. Over many years it has sustained an epic throughput of nourishment to many thousands of West End revellers, Londonist included. The junction of Tottenham Court Road, Charing Cross Road and Oxford Street will be a much hungrier place without it.

We’re certainly hopeful that Crossrail will deliver significant benefits to London, now that it finally looks like it’s going to happen. But we also share CJ’s hope that Dionysus (the Greek god of wine, don’t you know?) can soon rise from its progress-induced hangover to provide us with fried and grilled goodness once again.