Not Even Ken Can Save The Astoria 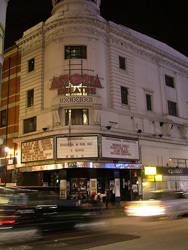 Some stories are true slow burners. We've been pondering the fate of one of London's grubbiest, tattiest yet best loved live music and club night venues since mid 2006. However, the Astoria has soldiered on, pepped up by 35,000 supporters signing a "Save the Astoria" petition.

Whilst its time on death row has been lengthy, the execution will be going ahead. Not even Ken Livingstone, friend of live music venues, can stay it. It's Crossrail, see. And if it weren't Crossrail then Tottenham Court Road station would likely be redeveloped anyway, given it's groaning escalators and tiny ticket hall. So the Astoria will be demolished to make way for a new Eastern ticket hall and escalators underground. But a replacement live music/theatre venue will be built into the new development above. It just won't look like a battered old pickle factory wearing neon baubles.

When it's going to happen is another matter. Some say 2010. Some 2015. Who knows. Given how long Crossrail was in the planning anyway, we reckon you've got time to get to a few more sticky gigs and camptastic nights yet. And on the plus side, Ken has pledged to set up a protection plan for other live music venues and support the scene so we're casting about for a worthy successor to the doomed Astoria. The Coronet, anyone?