Winter may be drawing in, but that didn't stop us from catching the amazing Jarvis Cocker at Shepherds Bush earlier in the week, and getting excited about both Left With Pictures and Jay Reatard. 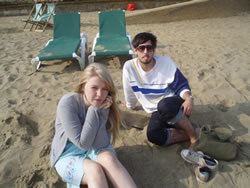 Looking forward to this week, and Monday night sees sold out shows from Glasvegas at Shepherds Bush Empire, Kooks at the Roundhouse, Slipknot at Hammersmith Apollo and Wolf Parade at the Electric Ballroom. If you want something that has tickets still available, we'd reccomend Slow Club at Union Chapel, with their folkpop blend that has had critics drooling for a while - tickets are £10 and it could be money well spent for a band many are tipping for the top in 2009.

It seems that this is the week of sold out shows, with Tuesday seeing XFM's Winter Wonderland playing host to the likes of Kaiser Chiefs, Ladyhawke, Ida Maria and Iglu & Hartley. If you want something that's not sold out maybe you'd want to catch the wonderful San Franciscians Deerhoof, with their sugary melodies and experimental spirit. Tickets are £12.50 each

The Ginger one plays the O2 on Wednesday night - no, not the Spice Girls, we're talking Simply Red - tickets are £40 to £50 each. Alternatively, Kathleen Edwards plays her alt-country tunes at Bush Hall - tickets are £12.50 each.

French Indie pop your sort of thing? Then Nouvelle Vague play the Forum on Thursday night - tickets are £18.50 each. Elsewhere, New Zealanders Fat Freddy's Drop play the first of two nights at the Roundhouse - tickets are £25 each.

Friday night sees Philadelphia based Grammy winning hip hop group The Roots play the Forum for the first of two nights - tickets are £20 each.

Photo of Slow Club comes from their myspace profile.