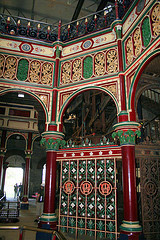 It's rare we think about sewage these days. Flush the loo and the waste may as well be carried off by magic amoeba for who knows what happens beyond the U-bend. But back in Victorian times when excrement running through the streets and into the Thames was a major public health concern and Parliament was almost forced out of Westminster during ye olde "Great Stink" 150 years ago, what happened to the poo was on everybody's minds. Hence, when Joseph Bazalgette, Chief Engineer of the Metropolitan Board of Works, constructed our revolutionary sewer system providing a radical solution to the unimaginably filthy Thames, described by Disraeli as "a Stygian pool reeking with ineffable and unbearable horror" it seems fitting he also left London with lasting monuments; glorious embankments and pumping stations, that not only testify to his engineering vision and ingenuity but grandly remind the masses where the shit goes now.

One such civic jewel is Crossness Pumping Station at Abbey Wood which has today been awarded £1.5m from the Heritage Lottery Fund to complete its restoration. The Beam Engine House is a Grade 1 Listed Industrial Building which features spectacular ornamental Victorian cast ironwork as well as possibly the largest remaining "rotative beam engines" in the world, with 52 ton flywheels and 47 ton beams, charmingly named after the then incumbent royals: Prince Consort, Victoria, Albert Edward and Alexandra.

Disused in the 50s, the Crossness Engines Trust was formed and began restoration work 30 years later, all of it undertaken by specialist volunteers contributing an astonishing amount of labour hours and dedicated expertise to returning the station its former glory, even getting Prince Consort up and running again recently. This HLF grant will enable conservation and refurbishment works to the fabric of the building and create a proper 'visitor experience', so we can properly appreciate this masterpiece of Victorian engineering that helped transform city life. The Trust is chaired by Peter Bazalgette, great-great-grandson of Joseph and, ironically, currently renowned for filling our tellies with crap.

You can visit Crossness by appointment on certain days - visit the website for more details.