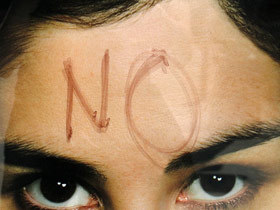 Continuing in the David Blaine tradition of cutting over-hyped American entertainers down to size, the audience at Sarah Silverman's gig on the weekend heckled the comedian during her UK stand-up debut. A sold-out Hammersmith Apollo crowd booed and slow hand-clapped as Silverman's performance, tickets to which cost £50, lasted barely 40 minutes and consisted of gags recycled from her TV show and three-year old concert film, Jesus Is Magic.

When asked for an encore, the comedian confessed that she had no other material, and resorted to a lacklustre Q&A session. Cue cries from the heavens of "we want our money back" and "I've seen longer clips on YouTube", catcalls that Silverman is presumably unused to in her native land, where her regular performances to the converted are treated by the basking ironic literati with a rapture more appropriate among megachurches in the Bible Belt.

Is Silverman funny? Reasonably, though not to the blistering, pant-wettingly hilarious degree her supporters attest. She's certainly capable of pushing the chuckle button if it takes her fancy. But it seems she decided that the Brit crowd would be won over by her mere presence on the stage, without the bother of pulling a decent show together. In a city where lesser-celebrated comics bust their arses nightly for a fraction of the spotlight Silverman stakes for granted, it's regrettable that she chose to squander what had been a huge amount of goodwill.

Sadly for Sarah, as her compatriot Blaine discovered with his hanging box antics in 2003, Londoners have a built-in bullshitometer that doesn't take too kindly to being shortchanged.

Image by forklift via the Creative Common Attribution license