Atheism, One Bendy Bus At A Time

By Craigie_B Last edited 156 months ago
Craigie_B Atheism, One Bendy Bus At A Time 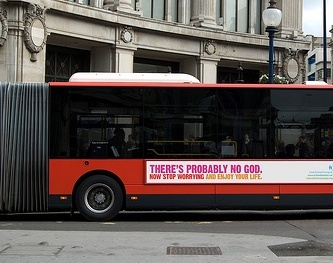 "And, Lo*, The Godless Bus Picked Up Speed Around Traffie Square..."

After quite a bit of news coverage, the move for a few buses to laud the non-existence of God - whilst simultaneously trundling London's streets - has gained pace.

It's a useful corrective to the ever-present pushing of pro-religious advertising from organisations that have recently discovered that billboards and bus advertising doesn't cost the earth - and it's more effective than black and white leaflets sneakily copied at someone's workplace, or that annoying shouting man at oxford circus.

(Just a thought - if there *was* an all-knowing god, wouldn't he/she be setting bendy buses ablaze with lightning bolts roundabout *now*, rather than yonks back?)

Anyway, the campaign has mushroomed. It's raising sackloads of money every day, evident on their justgiving site where they have now raised a hefty £102,412.93 and generated some great comments. The campaign seems to have caught the imagination, with donations coming from across the globe, and it may now spark similarly-minded bus journeys in other cities and countries.

A great summary of what's going on has just been posted by one of our favourites, Joan Bakewell, who also notes the hand-wringing around inserting the word 'Probably' into the slogan (perhaps to avoid breaching advertising rules - it may have otherwise offended people). So expect to see a few more of our much-loved bendy buses spreading 'the good news'. Probably.

Image from Base on Mars' Flickrstream