Leviti-Bus Fails To Catch On 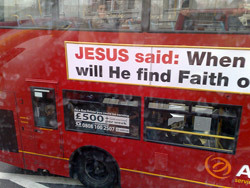 A month-long project to raise funds for an atheist advert to go on the side of a London bus has been derailed: not by an act of God but through a lack of pledges.

The gambit began in June when Ariane Sherine, writing for the Guardian's Comment is Free website, expressed her consternation at the prevalence of God-bothering ads for JesusSaid.org splurged across double deckers. Inspired by this, blogger Jon Worth set up a pledge, aiming to get 4,678 right-thinking folk to each donate a fiver and hence fund the surprisingly expensive £23,400 bill to run an advert promoting atheism on the side of a bendy for a fortnight. The ad's mild-mannered message? "There's probably no God. Now stop worrying and get on with your life."

The campaign closed yesterday, and it seems the sensitivities of Jesus' flock will remain unflustered as barely 877 people signed up, perhaps suggesting that the millions who've read The God Delusion are yet to be entirely convinced of His Almighty's nonexistence.

God's clammy-handed grip on our public transportation vehicles, which includes not only woolly-headed messages from dubious organisations but pastors posted to keep kids on the straight and narrow, looks set to continue.

Image from sara~'s Flickrstream via the Creative Commons Attribution license