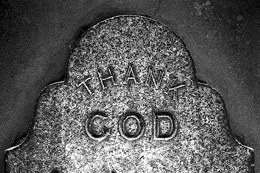 Back in August, a project to raise money for a bus advert promoting atheism seemed to fail after a lack of sufficient pledges. However, there's one thing you can say about atheists - they've got the patience of Job. This morning, the British Humanist Society, which organised the posters, confirmed that they've gone well over the £5,500 fund mark. They've managed to whip up a whopping £16,000 thus far, following a promise by gadfly to God-botherers, Richard Dawkins, to effectively double the donation, and the ads will be displayed on bendy buses in Westminster from January.

The idea sprang from the mind of Ariane Sherine, who was mildly affronted at bus ads for JesusSaid.org and decided that the happy and godless needed an alternative to clap their hands to. She started the campaign on Just Giving, and despite the hiccough alluded to earlier, victory has now been secured.

So what will the deity deniers get for their money? Well, the aim is for two sets of 30 buses carrying a sign which reads, simply, "There's probably no God. Now stop worrying and enjoy your life". Hardly likely to sway the Father fixated, perhaps, but it will bring a breezy smile to many and perhaps even give the odd doubting Thomas enough motivation to throw off the yoke of religion for once and all.