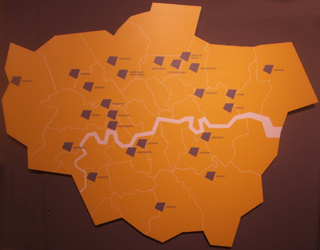 London is a centric city. The typical commute heads inwards towards a Zone 1 workplace. But London can also be seen as a collection of smaller towns, each with its own central area. The latest exhibition at New London Architecture looks at plans to regenerate these local town centres and thus shape a 'polycentric city'.

Opening with reference to 'the Mayor's 'blue doughnut' conjures up all kinds of improbable, possibly sordid images, until you recall that the recent elections were won thanks to a Tory torus of votes from the outer suburbs.

The walls display plans for developing 17 towns in the wider metropolitan area, including Park Royal, Lewisham, Croydon and Stratford. The information is as densely packed as a Victorian rookery, so make sure you pick up a free brochure to take it all in when you get back to your own town. As usual for NLA, these panels are complemented by a number of architectural models showing how key areas might be revitalised. Anyone with even a passing interest in the Croydon area should get along to see the impressive model imagining the town centre as 'London's third city'. And, of course, there's always the permanent model of central London that keeps us returning to this special place time and again.