By M@ Last edited 173 months ago
M@ Londonist's Back Passage 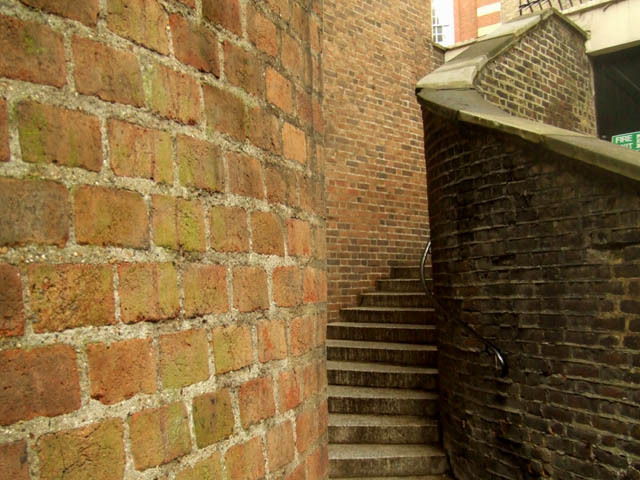 What? This week, a rare intrusion into the third dimension, courtesy of Cockpit Steps. The curious name alludes to a royal cockpit, where gentlemen of note would thrash their bantams against one another in the name of sport. Today, there is sign of neither cocks nor pits. Instead, a truncated helix twists 90 degrees around a blind corner, spilling out onto Birdcage Walk.

If you watch the video above, you can imagine how eerie the descent would have been during the swirling pea-soupers of yore. Indeed, this subdued winder comes with its own ghost story. A headless lady frequents the space between the stairs St James Park. The Times noted an incident in 1804, when a pair of soldiers encountered a not-so-sweet maid at the foot of the steps. One claimed to have seen the "figure of a woman without a head, rise from the earth at the distance of about two feet before me." The spectre wore a red-striped gown with red spots between the stripes—nice dress, shame about the (lack of) face. The lilly-livered guardsmen reportedly needed hospital treatment for the shock, while the bonceless damsel went on to feature in later tales. She almost got hit by a car in 1972 (it's hard to look left and right when you are divorced from everything above the shoulders). The motorist swerved to avoid the apparition and hit a lamp post. That claim must have lightened some insurance clerk's day.

Why use? Upstairs, one of London's most gorgeous collections of streets; downstairs, the ever-beautiful St James Park; onstairs, the chance of a supernatural liaison.

See all our back passages, mapped.