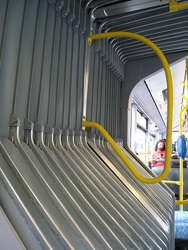 One of Boris Johnson's manifesto pledges was to remove bendy buses from the streets of London and replace them with a next-generation Routemaster - a populist promise that played well in London's hinterlands, where the moneyed folk rarely ride public transportation.

While the second half of that pledge is hostage to the whims and ideas of folk who entered the design competition, the first half looks to be on track: a consultation is currently underway discussing whether to remove the articulated vehicles from three routes, with the 38 bus likely to become a double-decker, and the 521 and the 507 replaced by 12-metre single deckers.

The 38, which runs between Hackney and Victoria, was one of the last routes to go bendy, where it replaced a fondly loved Routemaster in a less-than celebrated debut in October 2005. Since then the new vehicles have been cheerfully fouling up the traffic at Piccadilly Circus, getting stuck on Rosebery Avenue, or sailing along Essex Road either packed solid or near empty (maybe it's us, but a semi-full bendy is as rare as a baby pigeon)

Critics of the proposed move point out that the route's exceptionally high frequency (only the 25 and 73 are used more) is aided by the bendy's three doors and higher passenger capacity. According to one slightly hysterical London Assembly member, the move would bring "misery" to passengers, with reduced hourly capacity and more carbon emissions as more buses are pressed into service. Such misery, of course, being in opposition to the enjoyable Friday-night free for all as riders pile onto the bus in droves and ones face is delicately douched in the sweat glands of a fellow passenger's armpit.

The consultation continues until October 3rd, while local folk can pitch their oar in via this online survey.

Image from steve_w's Flickrstream via the Londonist pool