By chloeg Last edited 161 months ago
chloeg Beer Against Boris 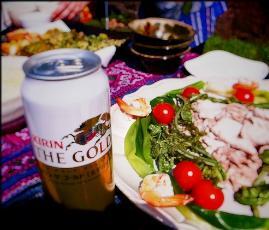 Getting your message heard by Whitehall's movers and shakers ain't no picnic, especially when they've been quaffing champagne with Team GB on the Beijing-London flight. This didn't deter the Manifesto Club, who used the bank holiday to take a stand against what they see as increasing paternalism in the way our public spaces are regulated.

For those not nursing heinous hangovers, recovering from bewildering mayoral speeches or getting back on the (carnival) wagon yesterday, there was another chance to do what us Brits do best - enjoy a beverage in the park. The alliteratively-termed Provocation Picnic in Hyde Park defended the right of Londoners to drink alcohol in public. The mayor's somewhat unpopular alcohol ban on public transport in the capital was highlighted as a key example, removing the right of people to drink responsibly in public spaces.

Far from just an excuse to get tanked up with your mates, the event aimed to argue against the “creeping” increase in no-alcohol zones in public spaces. This could mean that your favourite tipple is effectively banned from community gatherings such as street parties, Hogmanay celebrations and beach parties, which doesn't sound like much fun, does it? Critics argue that the rules are essential to tackling anti-social drinking and the issues of personal safety in public places.

The Manifesto Club's website informs us that the club 'is a pro-human campaigning network', which sounds very nice, doesn't it, if not a little bit, ahem, general. By their name alone you might have suspected that they support anyone with a manifesto about anything at all, but no - their aim is 'to bring together individuals whose ideas don’t necessarily fit into the politics of left and right, but who believe in developing people’s creativity and knowledge.' If this includes a fun picnic in the park with Pimms, frisbee and canapés, we're all for it.

Image courtesy of Fimb's photostream under the Creative Commons License.