Wiff-Waff For The Riff-Raff 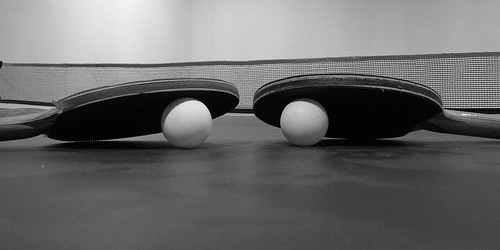 Taking to the stage at the Handover Party in Beijing, his successful flag-unfurling and debut on the international stage complete, Mayor Boris Johnson finally returned to a theme he has occasionally expounded since his election in May: expanding the capital's lexicon.

Having re-introduced us to the joys of "piffle" and "cripes" in his three months at the City Hall tiller, the Mayor used the opportunity of addressing London's bid team to discourse on the history of ping pong. Commonly thought of as a sport invented by the Chinese (and certainly one at which they are now masters), a booze-buzzed Boris revealed that it was in fact a game invented on "the dining tables of England", and that at it's inception it was known as "wiff-waff".

Fears that the Tory had tipped one too many Tsingtao's down his throat were acquiesced when a quick search revealed that, indeed, he was spot on. A deliriously excited Johnson, flanked by a baffled Becks and a giggling Gordon Brown (who later commented on the Mayor's work in "advancing relations between China and Britain"), later pumped a fist into the air and declaimed one of the unlikelier slogans for 2012: "Ping pong's coming home".

Hang about, that sounds familiar. Messrs. Broudie, Skinner and Baddiel are probably waiting by the phone right now.

The entire video is available to view on the BBC website.