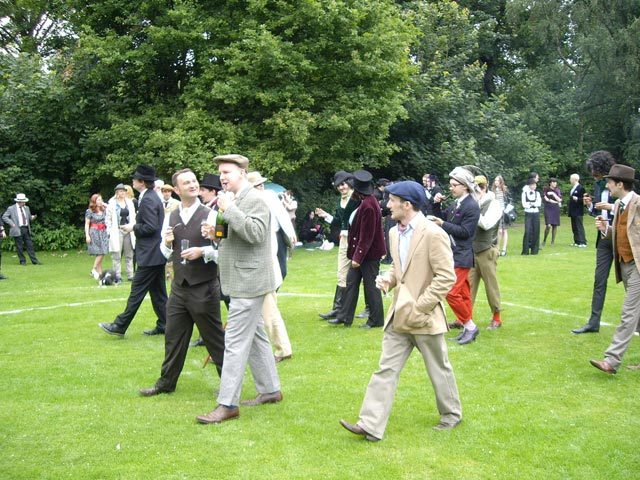 What, no free gin and tonic? Wah! After last year's G&T-fuelled shenanigans we were looking forward to more free booze and silly games in the sunshine at the fifth annual Chap Olympiad, but, alas, were limited this year to what we could carry, all the way to Hampstead Heath.

The semi-secret location didn't appear to have hit attendance, which was at the very least comparable with last year, and possibly even higher. As it turned out, we didn't even need our meticulously-collected tokens for entry; the slightly lazy tactic of "follow that chap there who's wearing a marvellous Alpinist's outfit, he looks like he knows where he's going" worked a treat, helped by the occasional poster en route, of which we would have taken a photo had our hands not been so full of Bags for Life (the modern-day hamper?) stuffed to the brim with homemade salmon paste sandwiches and gin. Lots of gin.

After a long and arduous trek, without the luxury of a manservant to carry our luggage, we finally made it to the Chap champ de champions, in the shadow of the radio mast somewhere mid-Heath. With nothing more than a bag of chalk and a megaphone, the Games got underway at half past one or so, with the traditional pipe smokers' relay, which ended with everyone a winner.

Luckily, such modishly equalising notions did not last long, as the rest of the events showed the highest levels of sporting prowess it is possible to achieve - without breaking into anything so vulgar as a sweat, of course. The cucumber sandwich tossers (perhaps an unwise choice of words there but we're sure you get the picture) employed a fiendish array of tricks, including folding the sandwich up into a paper plate and bowling it underarm, and eating it, then walking some distance away.

Beard-plucking, Dali-style, using plastic lobsters, was another highlight - until a firearm came into play; Greco-Roman wrestling, with surprise opponent Chap-O-San, and a hop, skip and a G&T were similarly fun to watch.

In all, it was all good fun; a little more rough-and-ready than last year, perhaps, and the lack of portaloos was a slight pain, but we managed, somehow, and it was worth all the effort in the end - even the blisters gained while toiling up Hampstead Heath's hilly wilds.

Moustaches of the Day: