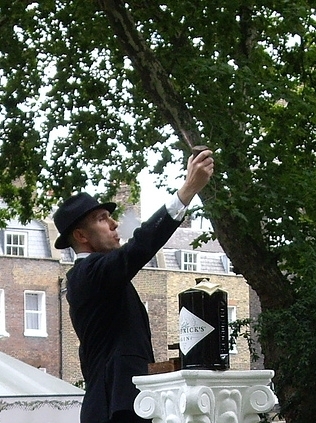 Londonist was thrilled to attend the The Chap & Hendrick's Olympiad 2007 last Saturday, a most amusing afternoon's entertainment in the leafy surroundings of Bedford Square Gardens. It was an absolute delight to see so many of London's brightest young (and not so young) things attire themselves with utmost care for the occasion, and the time simply flew by.

Of course, the day's focus was on sport (and disporting oneself), and after the ceremonial lighting of the Olympic Pipe (see left), the competition was on! The cream of the capital's sportsgentlemen and sportsladies lined up to compete in a variety of individual and team categories, jockeying genteelly amongst themselves for the honour of wearing the golden bowler hat, awarded to the winners of each of the afternoon's events. And what marvellous events they were.

Points and kudos were awarded for style, grace and becoming behaviour, and deducted for such vulgar transgressions as showing the signs of physical effort (perspiration a definite no-no), unsightly trouser creases and failing to follow the unspoken rules of polite society. Let those other Olympics concentrate so tiresomely narrow-mindedly on coming first; for Saturday competitors, the afternoon was about the journey rather than the destination.

So, without further ado, Londonist presents a round-up of photographs of the occasion, with grateful thanks to the organisers of the Olympiad, and with profuse apologies for any gin-induced shakiness of hand. One tried one's best. 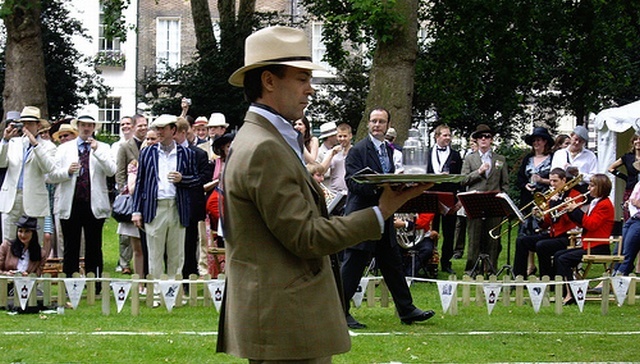 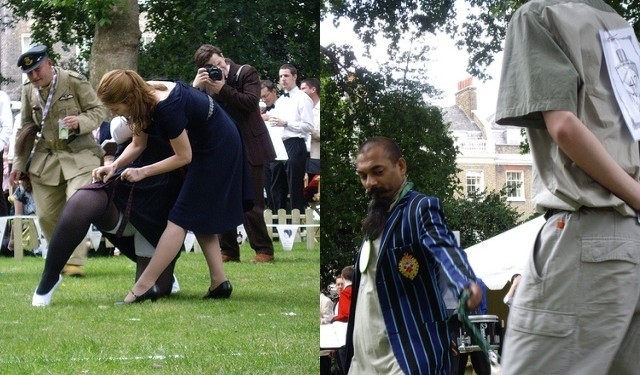 Highlights from two of the nail-biting bouts of Necktie Kwon Do, which left competitors in knots.

More pictures, including of some rather fabulous bounders, after the hop, skip and the jump - G&T in hand, of course. Points deducted for spillage - a most heinous crime. 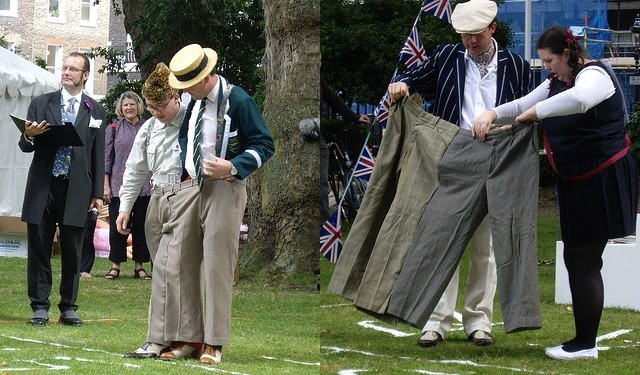 The "Bounders" event was particularly amusing. First, approach your lady, and engage her in conversation - proper conversation, mind you, none of this appalling "banter" that is so en vogue chez les jeunes de nos jours: 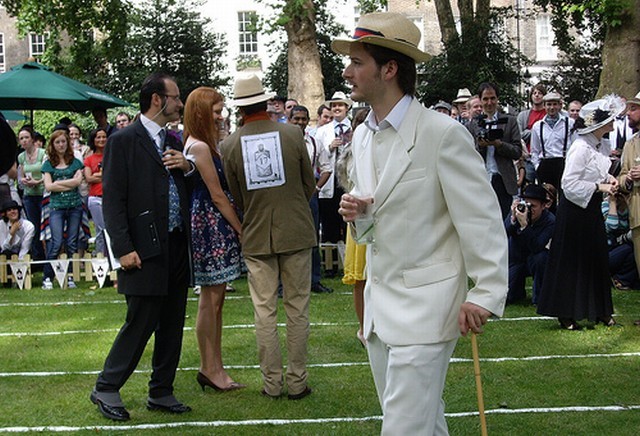 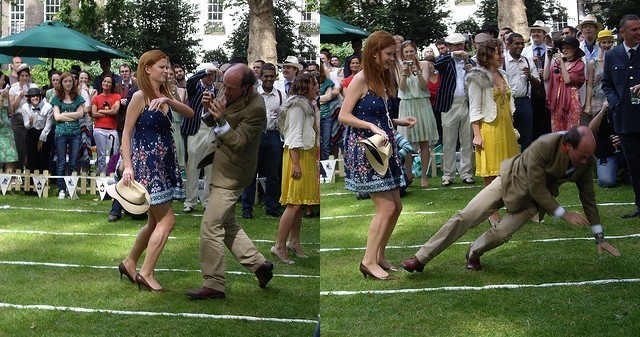 Oh, harder than a diamond is the heart of the modern young lady.

Most perilous of all the day's events was the Umbrella Hockey match; a high-spirited match of skill and dexterity, it skated dangerously close to the realm of proper physical exertion. 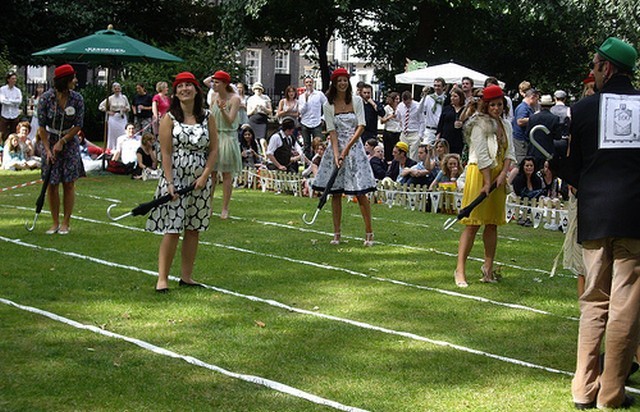 Umbrellas were brandished in earnest as the young ladies and gentlemen contested ownership of the 'ball', a bowler hat. 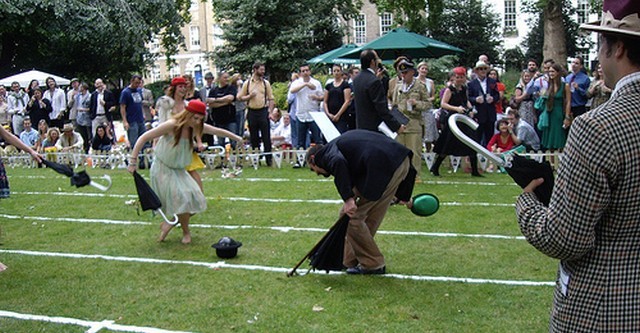 Despite the occasional clumsiness on the part of the gentlemen: 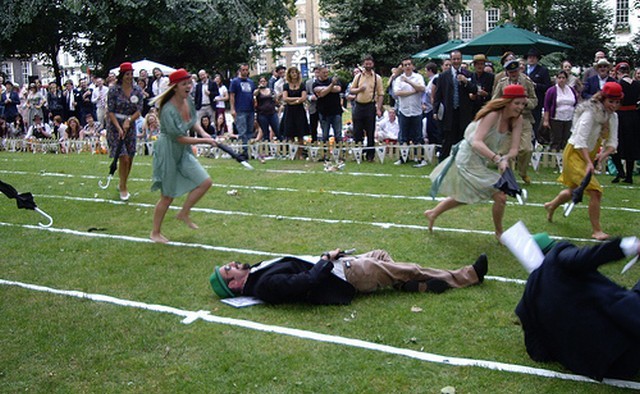 'Twas they who were eventually victorious, by three goals to two. 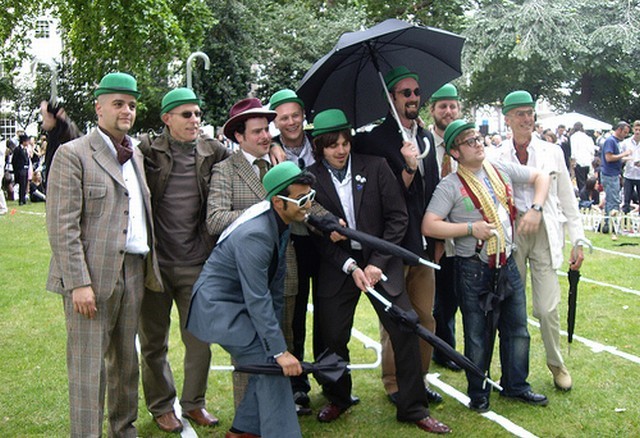 Proceedings were only slightly disrupted by the appearance of the world's best-dressed streaker (frilly red lace knickers and a polka-dot brassière).

The Hendrick's Steeplechase was rather a hoot; the jockeys (all fillies, in a National Velvet-style twist) mounted their steeds, then galloped leisurely along the course, pausing to pick up effigies of those scourges of the modern world, Newcastle Brown, the mobile telephone, and the "chav": 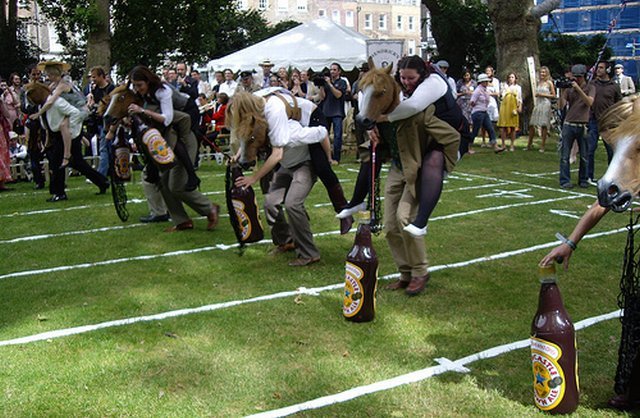 It was all rather splendid, and helped along enormously by incredibly generous allocations of Hendrick's gin and tonics, and of course by the crowd, most of whom took rather a lot of care to make sure they were, sartorially speaking, above reproach:

In all, it was a smashing day out, and we are terribly keen to go again next year. As an oasis from the pressing demands of modernity it worked like a tonic, and as we staggered home with the aid of the omnibus we couldn't help but wish the Chap ethos would spread a bit further; everyone's life could do with a touch more elegance and civility, and rather less rushing around and unrefinement. To that end, hurrah for the "Anarcho-Dandyist".

Londonist apologies for the somewhat dilatory appearance of this post; we were feeling rather, ah, delicate yesterday and many applications of smelling salts were required before the rosy bloom of health returned to our cheeks.

More photos here. Many thanks to Catherine for the generous loan of her many-splendoured fascinator , and to Carolyn/Fanny for the photograph of the gin-pouring.