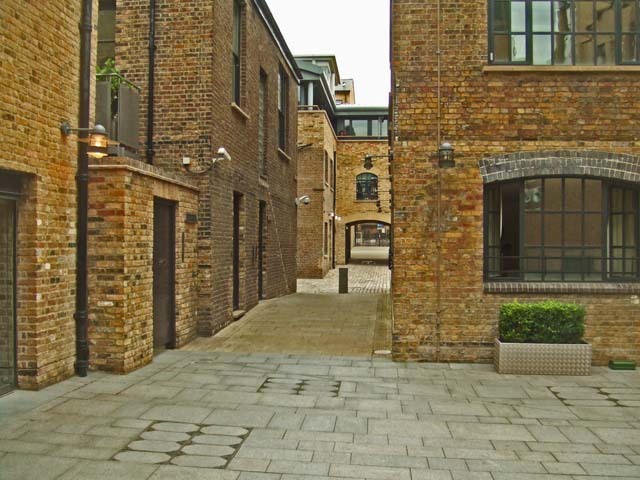 Where? Converted factories and warehouses east of King's Cross station, tucked inside the Islington boundary on yonder side of York Way.

What? Regent Quarter is a quaint huddle of 19th century industrial buildings, sandblasted and renewed into a community of small businesses and restaurants. Gone are the prostitution and drug dealing of the 1980s in favour of cosy courtyards where office workers catch the lunchtime rays. Names such as Laundry Buildings and Varnish Works hark back to earlier days when these premises hummed with trades more strenuous and noisome than the cursor-based vocations that now predominate. Spread over three blocks, the complex also includes 142 apartments, a Tesco, a Premier Lodge hotel and more Dickensian snickleways than you could shake Tiny Tim's crutch at.

Spanish restaurant Camino has quickly established itself as a local treasure. It may be hidden from view, but its spicy sausage aromas filter through the network of alleys and lure passers-by in from Caledonian and Pentonville Roads. A few twists and turns north sits a second restaurant. Kitchin, which opened just a couple of months ago, serves a curious fusion buffet of Italian, Chinese, Thai and Mexican.

Why Use? The series of alleys makes a safe and pleasant alternative North-South route than either York Way or Caledonian Road. You'll find this one particularly useful if you're an employee of the Guardian when, from November, you'll be working in the nearby King's Place building. Fans of disused railway infrastructure may also be interested to know that the disused York Curve railway line can be glimpsed through hoardings near Camino.