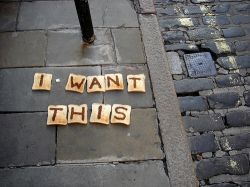 Londonists these days — breaking Guinness Book of World Records left and right. Ok, sure, flamenco, coffee, and walking is all well and good, but records involving...toast?

26-year old Freddie Yauner broke a new world record for the tallest reaches a toaster's ever popped. His invention, showcased at the Royal College of Art's graduate show, popped a piece of toast to the grandiose height of 2.6 metres, or 8.5ft. Yauner's designs meld satire with technology. Yauner explains that "the popping element of a toaster is totally unnecessary...We constantly conjure up too many objects that do far more than they need to do, with extra features year-on-year." This consumer-driven gadgets and gizmos race is explored in Yauner's 'Because We Can' project, which pokes fun at the superlative nature of product design today. Others in his series include the Fastest Clock in the World and the Longest Lipstick in the World.

Despite reaching such record-breaking fame, Yauner remains humble as ever, thanking his girlfriend and mum and dad on his blog for helping him reach his Guinness goals.

Central St. Martin's degree show inspire you to check out some more fresh young talent? The RCA show is on until 5 July.