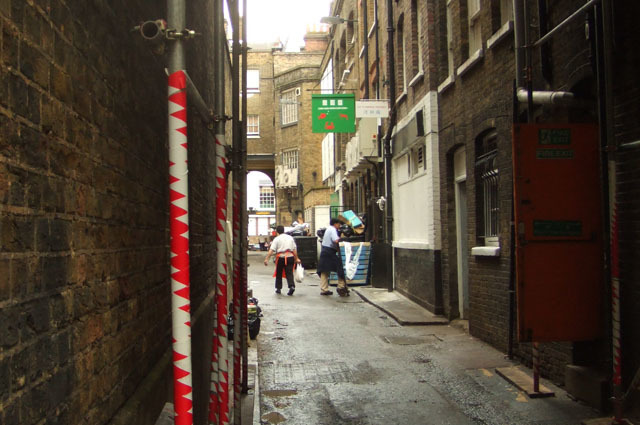 What? Dansey Place today is a foetid passage, where few would care to linger. You have no business to be down here unless you (a) collect discarded duck flesh and yellowing brassica, (b) appreciate the brool of extractor fans, or (c) you're researching a column about back passages for a well-known London web site. Between the wars, however, this was a notorious gay pickup point. Participating gentlemen would congregate in a local toilet, popularly known as Clarkson's Cottage because of its proximity to a theatrical costume shop owned by a Willie Clarkson. This was also a hotspot for blackmailers, who would extort payments from the cottagers to keep their secret quiet. Such was its notoriety that, upon closure after WWII, the toilet was allegedly bought by a wealthy New Yorker and installed in his garden.

Further back, and the route was known as George Yard until 1884. This name comes from the George and Dragon Inn, which stood roughly where those red and white posts are now until Shaftesbury Avenue was knocked through.

If you'd like to probe our back passages in more detail, check out our Google Map and archive.