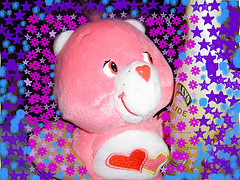 Another advert, another controversy, it seems. Just a couple of weeks ago a Grand Theft Auto IV ad was removed from Streatham because its gun-toting avatar was deemed insensitive in an area that had recently seen two gun-related murders. Now an ad in Crystal Palace train station for Chris Ryan's new book, Strike Back, will also be taken down because of its pro-violence message.

With a recent spate of stabbings making headlines, it's no surprise Londoners are on heightened alert. And unlike the image-based GTA ad, this one has some pretty evocative calls to action, listing "Rules of Engagement," which include "They bring a knife, you bring a gun," and "They bring a fight, you bring a war."

After complaints from passengers and a condemnation from the British Transport police, the station owners have ordered the advert off their property. Hopefully they'll replace it with something like bunnies hugging. Or Unicorns. Or Care Bears.

Care Bear image — with a bottle of Bailey's? — courtesy of Eggybird's Flickrstream under the Creative Comments Attribution License.