GTA Poster Not Loved In Lambeth 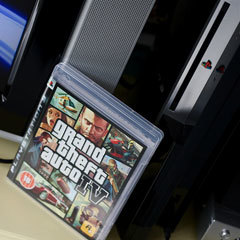 When not wowing critics and fans alike, and drawing hordes of male 18-35 year olds into a hermit-like existence as they try to crack the game's labyrinthine layers, Grand Theft Auto IV has been courting controversy like a stressed out salesman courts cheap hookers.

GTA IV's violence encourages copycat activity by players, say critics (an argument given credence when a Croydon man was stabbed as he queued to buy a copy). Christian conservative lawyer Jack Thompson, never knowingly unhysterical, wrote a letter to the mother of Strauss Zelnick, CEO of maker Take-Two Interactive, in which he compared him to a Hitler Youth member.

And those billboards! A lady lusciously licking a lollipop, another toting a gun: they're nothing if not provocative. Well, one London council has had enough: authorities in Lambeth have successfully lobbied to have one of the posters removed.

The billboard, near Streatham's ice rink, featured a woman in a yellow T-shirt, toting a MAC 10 machine gun - a particularly insensitive pose in an area that has seen two gun-related murders in the past year, and not entirely in keeping with efforts to convince kids that packing heat or blades isn't the done thing.

Billboard owner Clear Channel, happy enough to throw the poster up, were equally happy to take it down when the level of local disdain toward it became palpable.