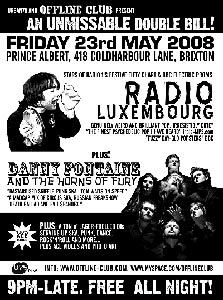 In our ongoing attempt to catalogue the best of things in London, it would be remiss of us not to mention the Urban75 shindigs down in Brixton. They've been running for a fair while now. In fact much longer than we've spent wondering where the word shindig actually comes from, probably.

First off, its free. Free, yet good things are always good. This is obvious we know, but it's a good indication that it's done for the sheer love of it. Based mainly in Brixton (although they do sometimes do a night in Crystal Palace). These events are alternative without being sneeringly hip in skinny jeans and haircut from page 17 of New Look magazine, 1984, way. It is very much related to the site Urban75.com.

Having been to one last weekend at the Prince Albert in Brixton. We can vouch for it being like someone's friendly house party, which they've opened up for the general public. Featuring a combination of bands, deejays, films, comedians. This time it had bands, of which we caught 2. The most memorable were an entertaining Ramones cover band. Now this Londonista isn't generally a fan of cover bands, but even though they looked like the Ramones shrunk after an especially hot wash, they were entertaining, and got the crowd furiously pogoing. The deejays? well only eclectic can cover a music policy which ranges from old school reggae, to S-Club 7. In the past they've put on people like Rob Newman, Jim Bob from Carter the Unstoppable Sex Machine, Tv Smith from The Adverts, Tom Robinson. We'll stop now, as lists can get dull. But you can see that actually they could charge a fiver or so and get away with it. But they don't. Good on 'em we say.

Entertaining, friendly, and free. What more do you actually want from a night out?

Oh, and there is one on Friday and next Tuesday, at The Prince Albert in Brixton. Oh and a bigger one at Jamm also in Brixton on the 12th. Click here for more details.