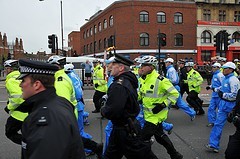 Well, a Metropolitan police authority report has revealed that said security presence cost a whopping £750,000. And while it’s not Londonist’s style to bluster about taxpayer’s money and wotnot, according to Lib Dem mayoral candidate Brian Paddick, the very same Chinese torch escorts that Ken Livingstone chided as "thugs" and denied association with afterwards, were actually authorised as part of a Greater London Authority agreement with Chinese officials.

The MPA report makes it quite clear, in direct contradiction to what Livingstone has told us, that the Chinese security guards were part of the legal contract between the GLA and the Chinese authorities.

For the Mayor to say he knew nothing about it - and would not have allowed it - is simply not true.

How much the Paddick broadside will hurt Ken, or how much more attention the other independence movement protesters were remonstrating over will garner, remains to be seen – but keep up with the latest in Dave Hill’s Londonist mayoral updates.

Images of the protests courtesy of Rimski's photostream.