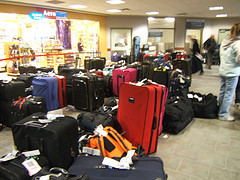 Not that this is any surprise to those following the T5 bungle, but plenty of passengers still don't have their bags back, despite all the sorting, dividing, shipping to Milan and magical voodoo that BA has been up to over the past two weeks.

Now one passenger, Michael Birtles, managing director of European Rail, who has been missing his bag since T5's opening day, March 27, is trying to speed up the process by offering a prize for the lucky baggage handler, airline rep, Italian courier, or garbage man who finds his suitcase. The prize? Round trip, standard class Eurostar tickets to Paris worth £300. The only catch: He wants the bag by 5pm tomorrow.

Though it's a valiant effort to get his bag back, the odds are probably not in his favour. BA managed to mishandle about 19,000 bags, so unless he can say his is the lime green flowery number that sings "God Save the Queen," it'll probably be pretty hard to spot.