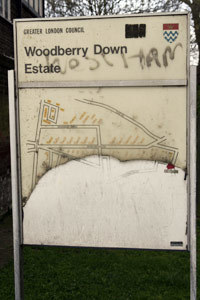 Did you walk to work today? Members of the Londonist team managed it as did notable others: Londonista Hazel went in an efficient, no messing about straight line from East End to Farringdon, while, Londonista Dean took in a pastoral pre-work stroll along a north to south route. Did walking to work change their lives? What's it like on the streets at 8am? Will they want to do it again? Let's see...

Being armpit height to most normal commuters and beholden to the laughable Hammersmith and City line that seems incapable of entering a tunnel without stopping in it for five minutes, the Walking Works pledge was something I was really looking forward to. There was pleasant, hazy spring sunshine, no kids on the streets as the NUT strike was giving them all a lie-in and I had a straight line from home to office to march down. I sprang out of the house, blithely bounded around the corner... and had to wobble inelegantly away from a big puddle of still-wet yellow vomit in the middle of the pavement. It was like that all the way to work: the spring in my step alternating between joyous freedom from London Underground and leaping away from urban unpleasantness.

Mile End to Stepney Green, then Whitechapel to Old Street, then Great Eastern Street to Farringdon was grubbier, more choked with traffic and less picturesque than I had hoped for. Nonetheless, it was a pleasure to walk through Whitechapel as the market was setting up, dodging around lads wheeling scary pumpkins and enormous leeks out of vans. A little closer to the City, I saw a few businessmen with babies in buggies, pushing their kids along with one hand while tapping away at Blackberry devices with the other. Getting into the business district, I collided more than once with perky picket lines outside various Home Office and public sector buildings. I kept saying to myself "Ooh, you wouldn't have seen that if you were on the Tube" - and I wouldn't have arrived feeling serene, calm and on time instead of furious, crumpled and late.

It took one hour and twelve minutes without getting too sweaty and having previous experience of running to and from work, I remembered to pack a clean shirt and plenty of water for the walk. I'll do it again, as long as the weather is good and I can find some smaller, less traffic-heavy roads to walk along.

According to Google Maps it's a full 11.3 miles door-to-door between my house and my place of work. Luckily, Walking Works states a mere half-hour walk is sufficient, so I've decided to take a scenic jaunt from Stamford Hill to Finsbury Park. Padding up the hill and onto Amhurst Park, the full force of the wind hits me and I sense, as the sun pops behind a cloud, that a storm's a-brewing. The streets are mainly empty, save for a few members of the local Hasidic community going about their business, and the glum faces scowling out from behind grimy bus windows make me glad I've decided to walk.

After ten minutes of little to report, the more interesting part of the journey begins when a sharp right on Bethune Road leads to the New River Walk along the top of the East Reservoir. Unlike it's watersports-equipped Western cousin, the East Reservoir has been left untouched since going out of service, and nature has taken full advantage, with mallards and moorhens swimming lazily in the stiff breeze. This being London, the pastoral scene is sullied by mounds of rubbish that have piled up along the banks, although some resourceful birds have managed to use the debris to construct miniature islands - one swan in particular is sleeping on a solidly constructed island of twigs and takeaway boxes.

After the reservoir comes the Woodberry Down estate, whose dereliction now appears to be intentional rather than accidental - a number of buildings have been torn down to make way for Hackney council's regeneration project. Still, a few gems remain, including a particularly striking block that looks like it was airlifted straight out of Ceaucescu-era Bucharest.

By the time I reach Manor House station the rain is starting to teem down, and I decide to cut my losses and hop on the Piccadilly Line. I'm slightly disappointed to later find that I only covered a mile and a half in 40 minutes, but it was certainly a novel start to the day.

Did you walk to work today? Tell us about your journey in the comments below.