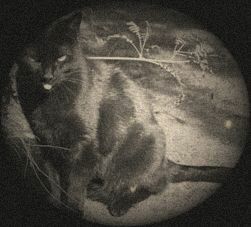 The London cat-rippings of 1998 continued into 1999. Even more bizarre was the RSPCA voice that stated, after several months of methodical research into the strange deaths, that vehicles were to blame! An inspector analysing the decapitations claimed that foxes, badgers and dogs had also been the cause, although I’m unaware of any animal native to England that kills in such a fashion. The vehicle theory was also dismissed by cat owners who claimed that many of their pets had been discovered in their back gardens or far from a road.

The satanic connection came to the fore on several occasions, despite such rumoured activity often being nothing more than local urban myth. Forensic psychologist Susan Hope-Burland commented, “… this scale of ritualised cruelty is rare. It’s very reminiscent of the way serial killers behave.”

Whilst the hysteria and wild theories were becoming as confusing as the mystery itself, the killings spread to North London and Surrey.

After what seemed like a lull (or should that be a lack of press interest?), the summer of 2001 brought more rippings, with half a Muntjac deer being discovered in Wycombe, its wounds having all the traits of a puma or leopard kill.

By this time the Bexley ‘big cat’ had been spotted several times, but no connection made by the authorities between the two; and further north a handful of strange attacks on swans, which were found decapitated, had all the hall marks of a ‘big cat’ attack. At Penge, a nineteen-year old white pet cat was found beheaded; and in New Malden another pet cat had its tail hacked off – a similar attack would occur five years later, proof that the ‘cat-ripper’ was a sum of many parts, but definitely real.