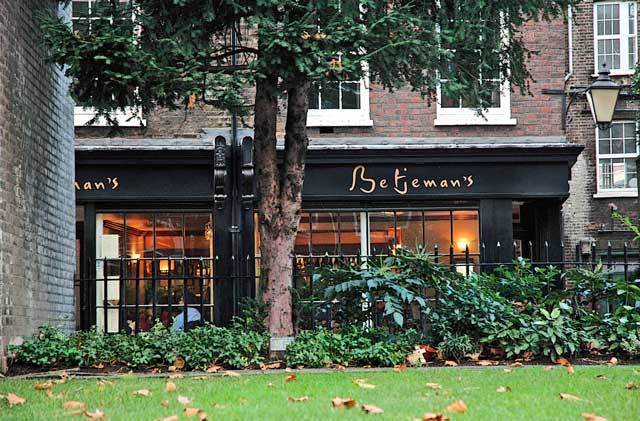 Across the street from celebrated Club Gascon (with a list of accolades out its coulis) and hardly more than a belly roll from “nose to tail” gastro-fiends St John Smithfield, wine bar and restaurant Betjeman’s holds its own. And what a relief. Unlike Gascon and St John, Betjeman’s takes it easy on the sumptuous as well as on the prices (although it still ain’t cheap). Named after Poet Laureate, Sir John Betjeman (the premises were once his home), Betjeman’s is simply good.

The restaurant’s theme is English food, which is well sourced; the Goosnargh Chicken with dumplings is particularly mentionable. They do fine by the wines too, with a short but notable list. We Londonistas especially like Betjeman’s selection of New Zealand whites. Topping what's to eat and drink, this elegant and understated restaurant is located on Cloth Fair, easily one of London’s most evocative streets. We recommend trying to snag the window seat with the view of St Bartholomew the Great, one of London’s oldest (1123 AD) and most filmed ("Shakespeare in Love," "Four Weddings and a Funeral") churches.

And London shops on Christmas Eve

Are strung with silver bells and flowers

As hurrying clerks the City leave

And marbled clouds go scudding by

From “Christmas” by John Betjeman