This Fare Refund Swindle Has Ceased To Be 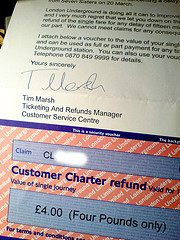 We're still wondering whether civil servant, Trushar Patel, is either a clever sod, just another thieving crook, or a bit of both. Either way he's spending the next 18 months on the tax payers board and lodging for: conspiring to procure the execution of a valuable security. Or, in the long-lasting Queen's English, he swindled London Underground out of twenty two grand by getting his family to fill in bogus fare refund forms.

Now we've never bothered filling in one of these forms, but we hear it's a bit of a bind. So you have to give the guy some credit for the effort involved. And it only took London Underground noticing that there were 7,105 claims from the same address for the con to be rumbled. We're told the claims amounted to an average of 8 per day, which when balanced out across everyone liable to claim for a delay who doesn't, is probably quite fair cost wise. Perhaps if he been a touch more Robin Hood like when laundering the cash.

But what we really love about the story are the comments made by the Prosecutor regarding the administration of the refund scheme. Not happy to settle with the Judge's comments that the scheme showed: a high level of incompetence, Francis Sheridan went one better, announcing: the administration of this scheme was a complete shambles of Monty Pythonesque proportions. Anyone wishing to imagine Bob and Ken once upon a time skipping around the TFL offices, battering each other with stuffed parrots screaming "Oh no, not the comfy chair" please feel free.